The recent Ebola outbreak in DRC has made the international news, and you know how the media loves to dramatize things. Yes, it’s serious. No, it probably won’t impact you in America or Europe. If fact, it probably won’t even impact me, here in Brazzaville. According to Google Maps, you could drive from here to Beni, DRC in 50 hours. I think it’d take longer than that (not advisable! Don’t do this!). It’s about 1,000 miles away as the crow flies (about the same as NYC to Miami, as the crow flies), or about 2,500 miles on roads (about the same as NYC to Mexico City, on roads).  You could potentially take a boat up the Congo River about a thousand miles, which would be maybe faster than driving? I don’t think it’d be very comfortable. Or you could fly direct to Kigali (3 hours) and then drive a couple hundred miles through highly unstable areas to get to the Ebola zone. 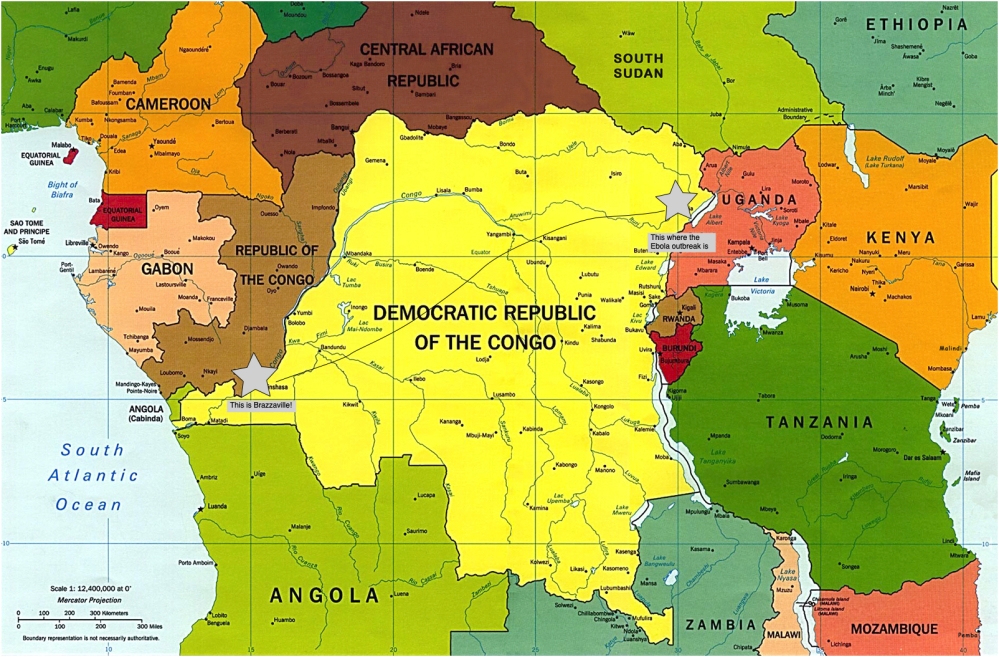 Even if Brazzaville were in the Ebola zone, it’s actually a difficult virus to catch. It spreads from human to human through bodily fluids. So, just going to the grocery story will likely not result in Ebola transmission. The death rate depends on the strain and speed of medical care (it varies from 25-90%). The scary part is really the lengthy incubation period (2-21 days), and the misinformation in the region. Most of the Congolese people I speak to don’t believe Ebola is real. They think it’s a government conspiracy. If they do think it’s real, they have no idea that it can be transmitted through bush meat. Bush meat is very popular here. The big market in Brazzaville has a bush meat section, where you can find all kinds of forest and jungle animals. Ebola isn’t the only disease you can catch from handling bush meat, either.

Anyways, suffice to say, Ebola isn’t a concern here at this time. We have plenty of other fun medical issues to deal with. Most notable is malaria. We are all on anti-malarials, even Lily. There is also Zika here. Besides diseases, there are plenty of insects to cause problems. Mosquitoes transmit diseases, but they also cause itchy bites. The Asian Tiger mosquito, also found in America, bites during the day (most other mosquito varieties bite in the evening) and cause nasty welts on Lily, which she scratches in her sleep until they bleed (and then they stop itching, go figure). There are also fourus here, which are nasty little bugs that bite you and cause a horrific, albeit temporary, itchy/burning sensation. They live in grassy areas and are the worst. The WORST. We also have mango flies here. They are just boring flies but they lay eggs in random places (like slightly wet towels by the pool, or in sand boxes on playgrounds) and the larvae can get in to your skin and start growing. Lily has had two mango fly larvae in her skin this year. To extract them, you cover their tiny air holes with vaseline or aquaphor, wait for them to surface, and then push them out. It’s so gross, people. The only good thing about mango flies is that they don’t carry diseases, and usually don’t cause infections. They just nasty.

One thought on “A note on Ebola”