When it comes to exploring the city, I’m very lucky that there are taxis everywhere, and that the price is always the same – 1,000 CFA (about $1.50). Taxi drivers are fairly knowledgable about the city, and I haven’t gotten lost yet (knock on wood), and my lack of French hasn’t been a huge issue. You can’t walk a block without a taxi honking at you, wanting to take you somewhere.  Also lucky for me, Google Maps has a very accurate map of the city, to include dirt roads and side streets with no names.  Thank you, Google! There isn’t Google Street View yet, but it’s only a matter of time. (Side note: follow me on Instagram [@hilary1121] where I often post videos, in the ‘stories’ section, of my taxi rides.)

This week was Ben’s birthday, he turned 29 yet again. We ventured to Mami Wata, a very popular restaurant on the river, for his birthday dinner. The food was great, and Lily was somewhat behaved.  The restaurant afforded great views of the river and Kinshasa.

We watched flocks of birds pass by, low over the water, on their way home for the night. 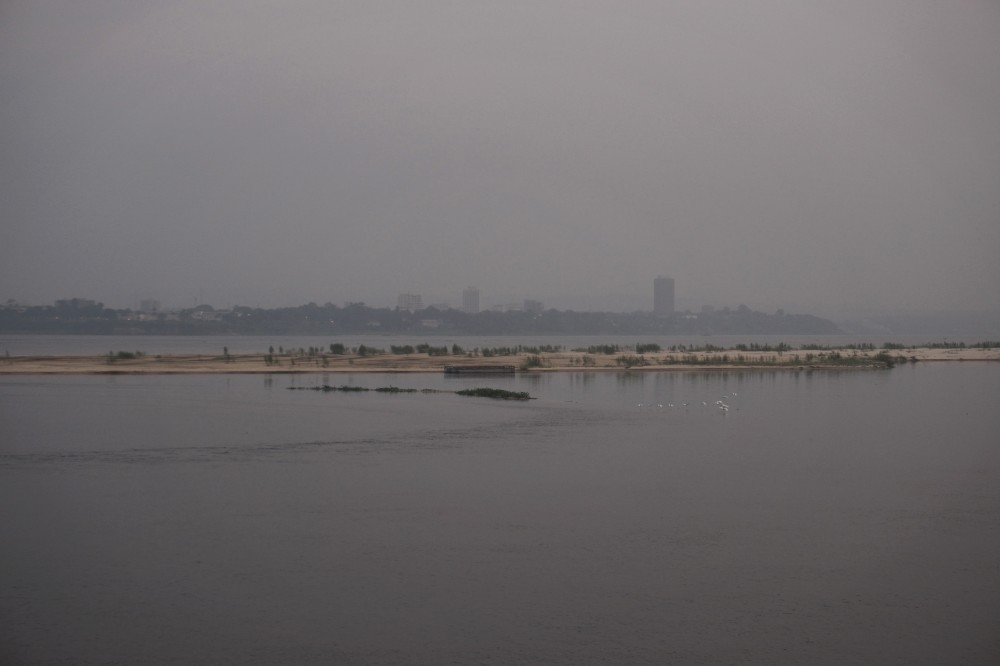 The bridge in the below photo lights up at night, and can display messages with the multicolored lights. On the right side of the photo, you can see the corniche. They close it down on Sundays, I believe, so people can walk around and enjoy the riverside. 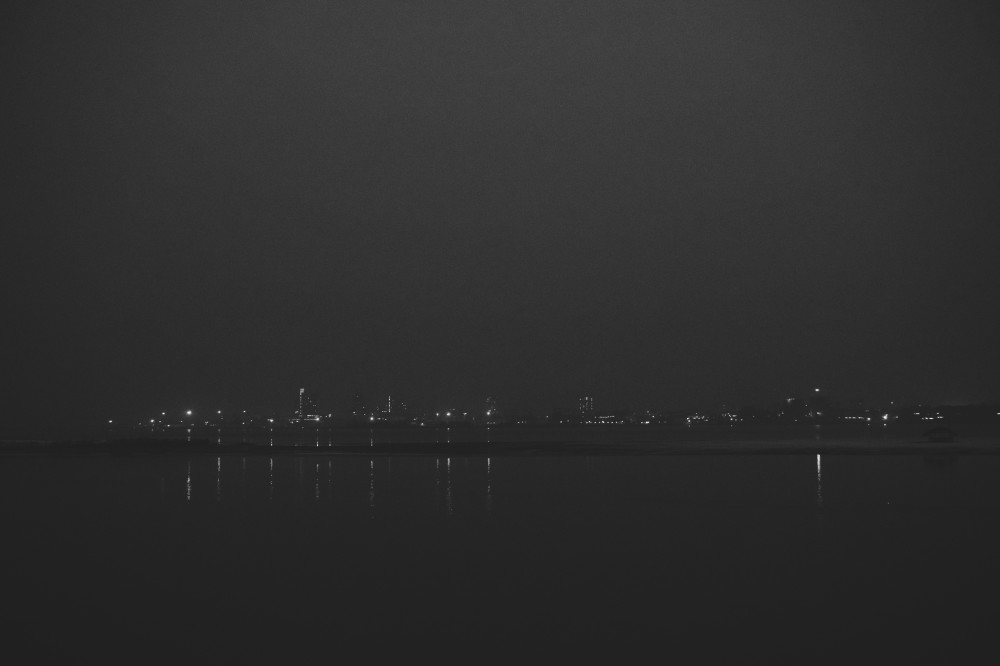 I also ventured to the craft market in Marche Plateau this week, where I fell in love with a pair of odd-looking pygmy carvings. I took Ben and Lily back the next day to help me cart them home. What do you think?? 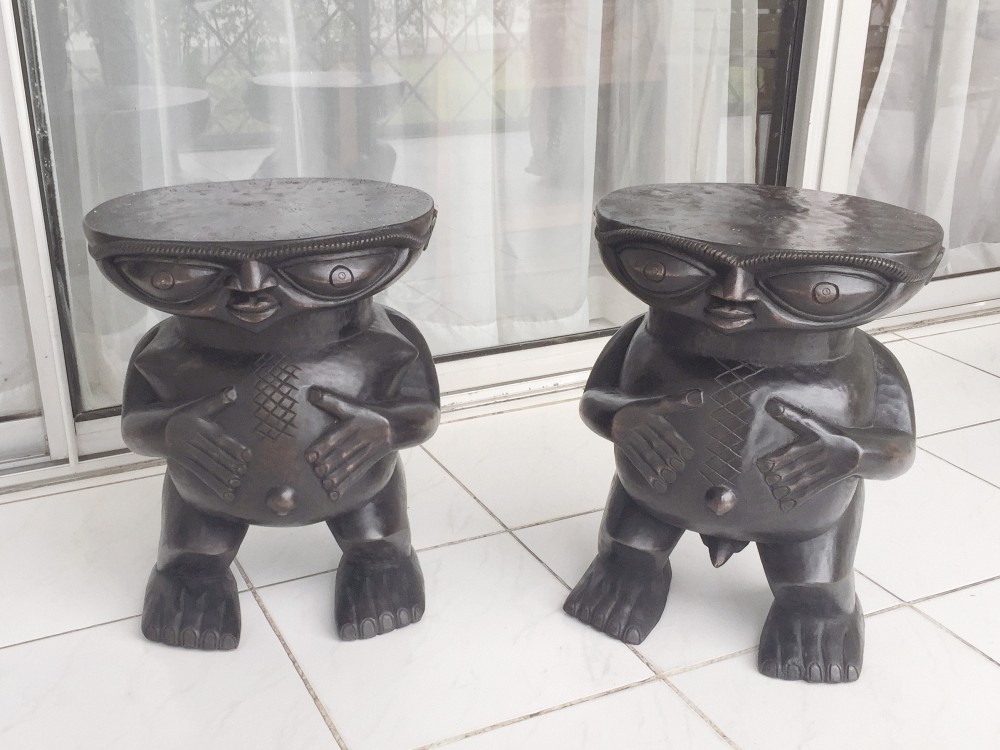 I was impressed by how much of the crafts are local, or near-local. Much of the art is done by local artists, and many of the fabrics and carvings are from Congo, Cameroon, or elsewhere in West/Central Africa.  If you weren’t aware, the second volume of The Adventures of Tintin was titled Tintin Au Congo, where Tintin went to the Belgian Congo and Tintin uncovered a criminal diamond smuggling operation run by Al Capone. There were several Tintin-inspired crafts at the market.  And, of course, it wouldn’t be a craft market in Africa without the usual carvings of animals, masks, batiques, jewelry, and bags. 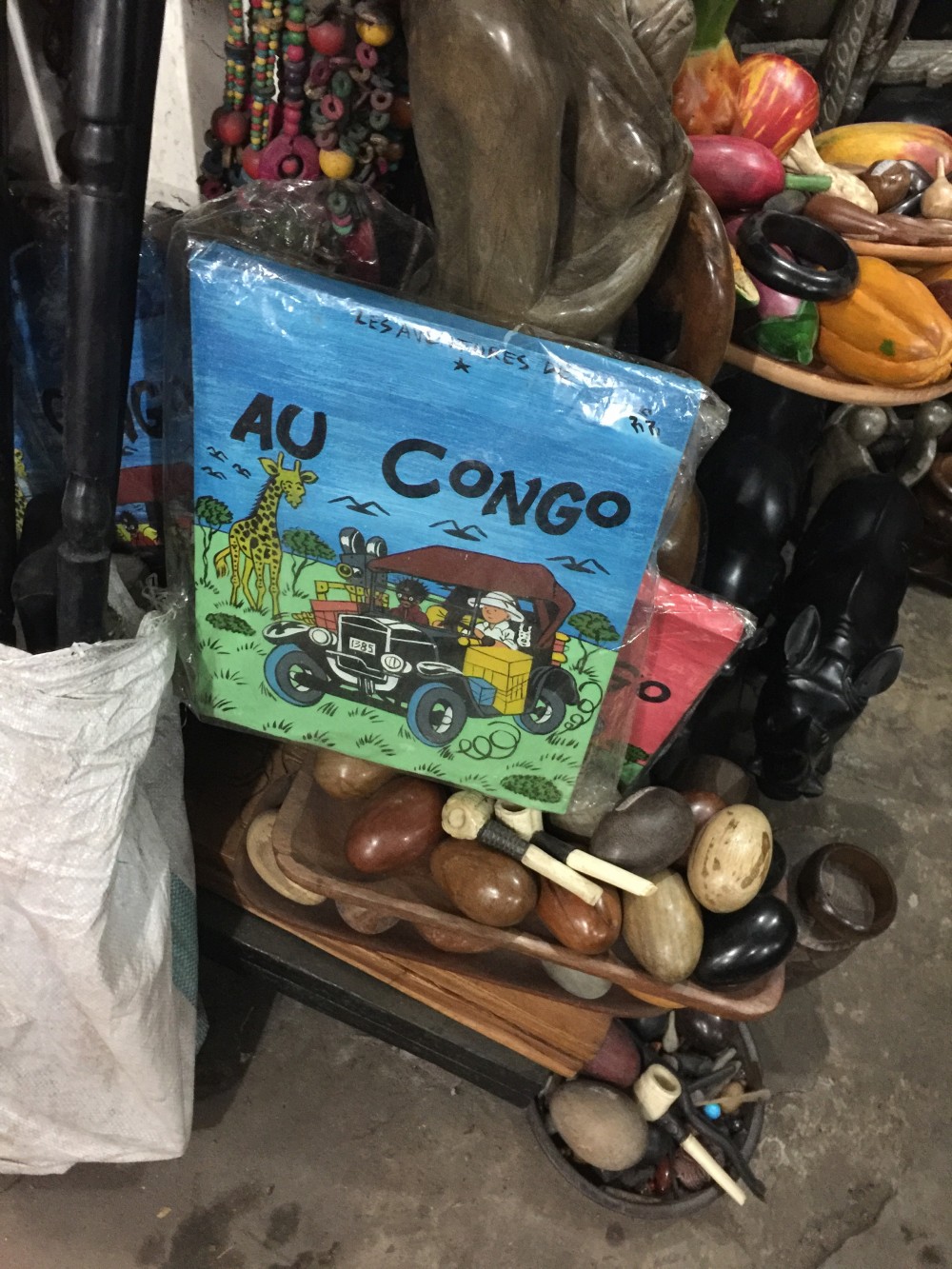 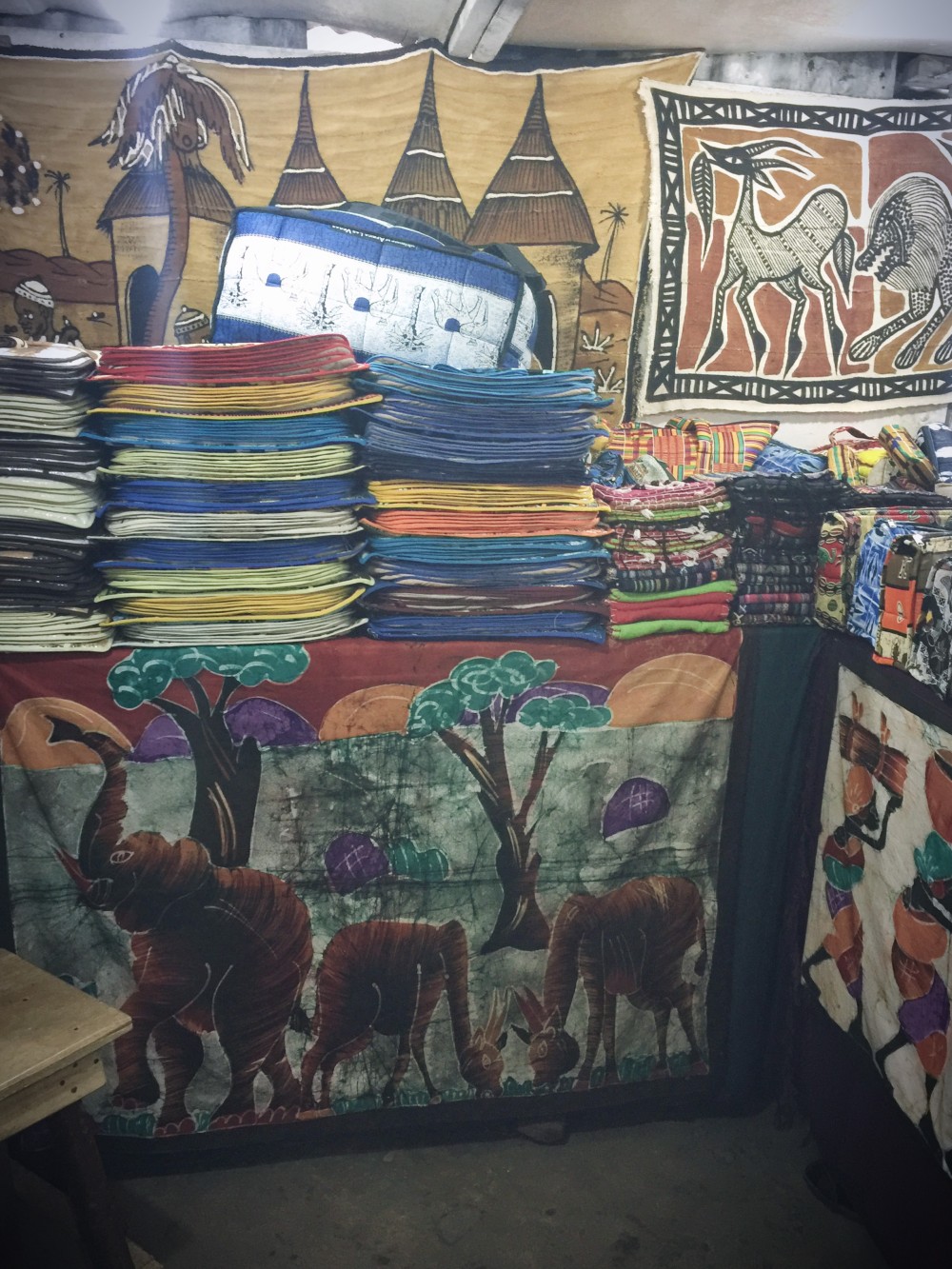 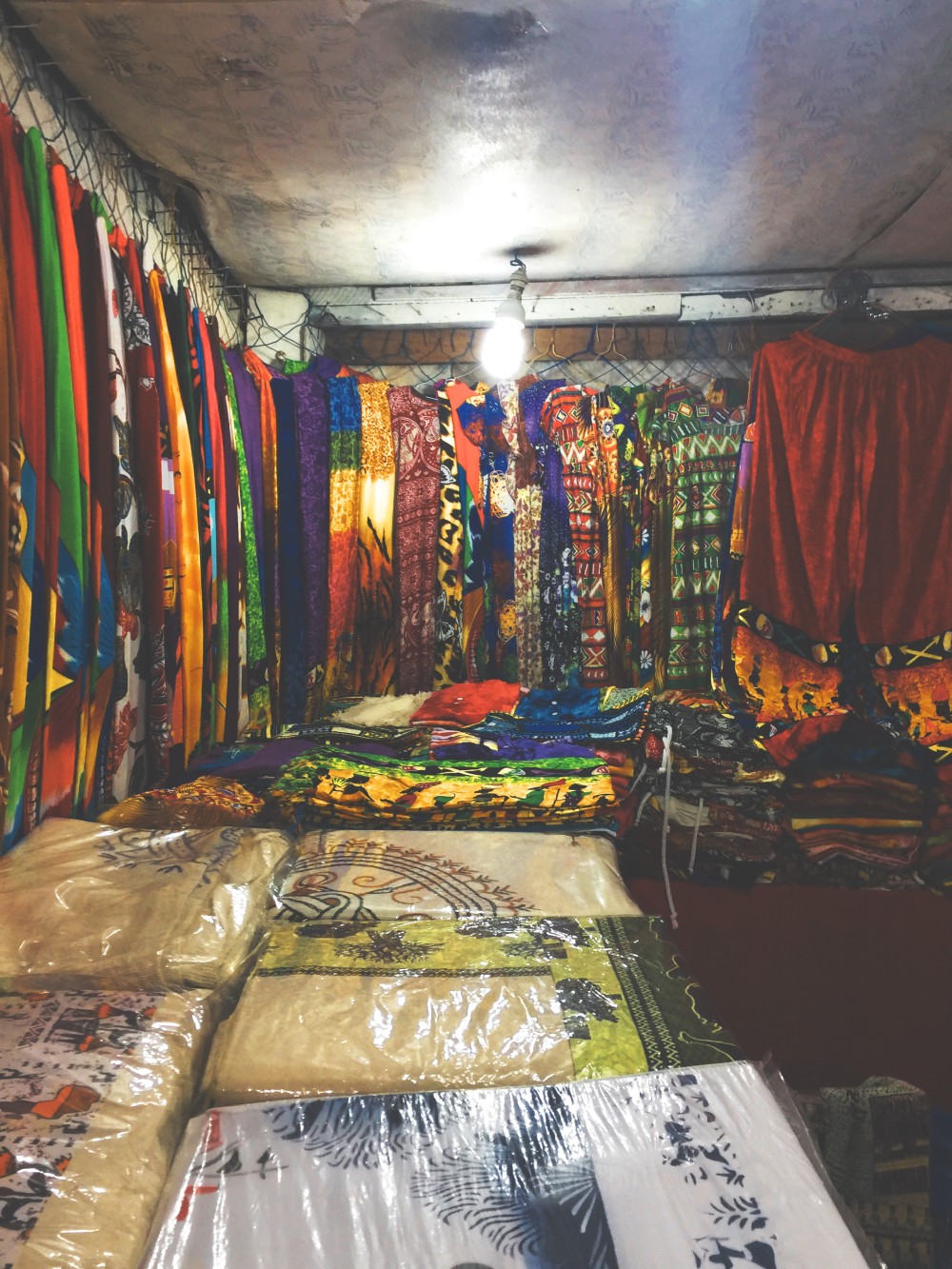 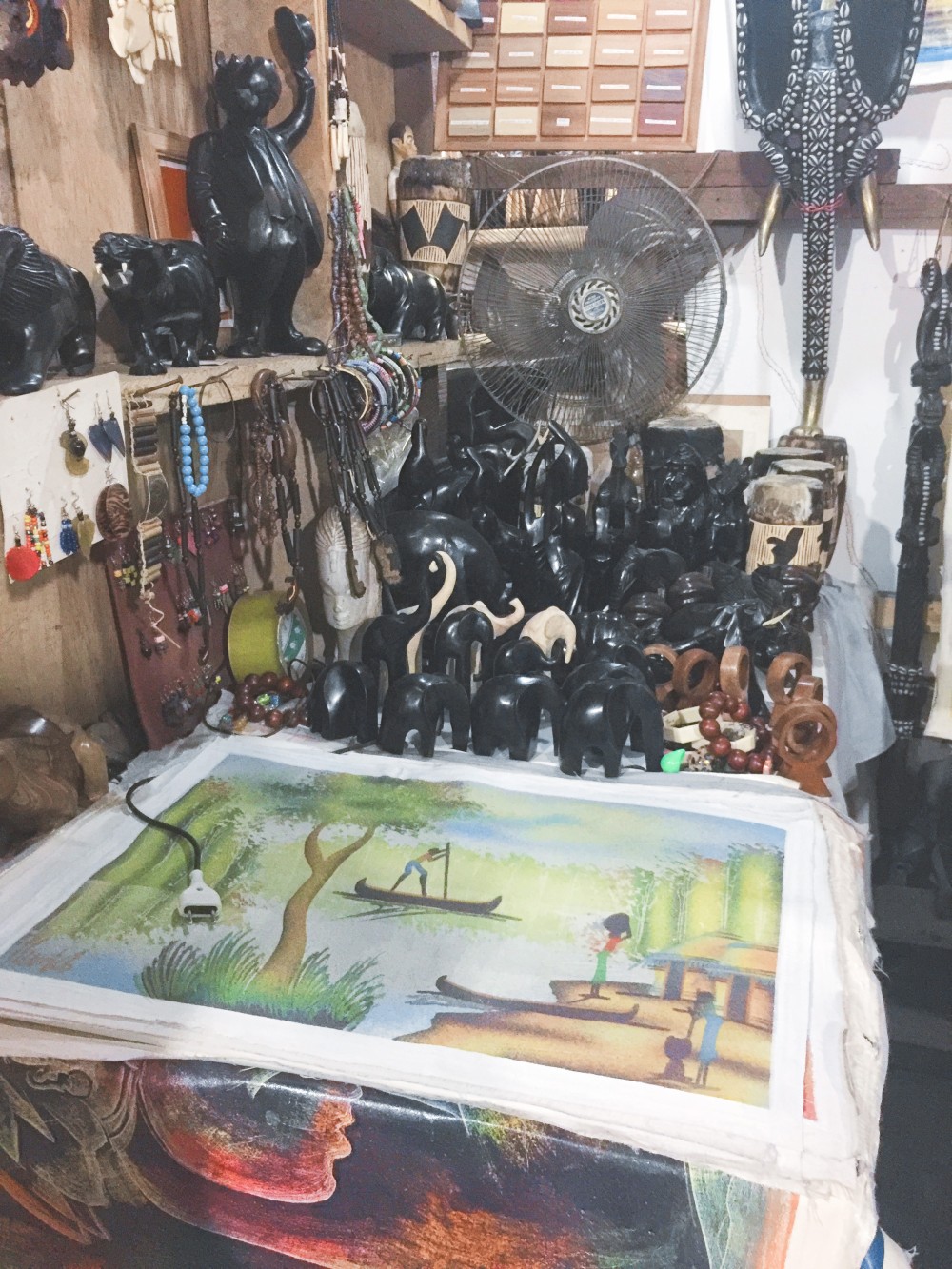 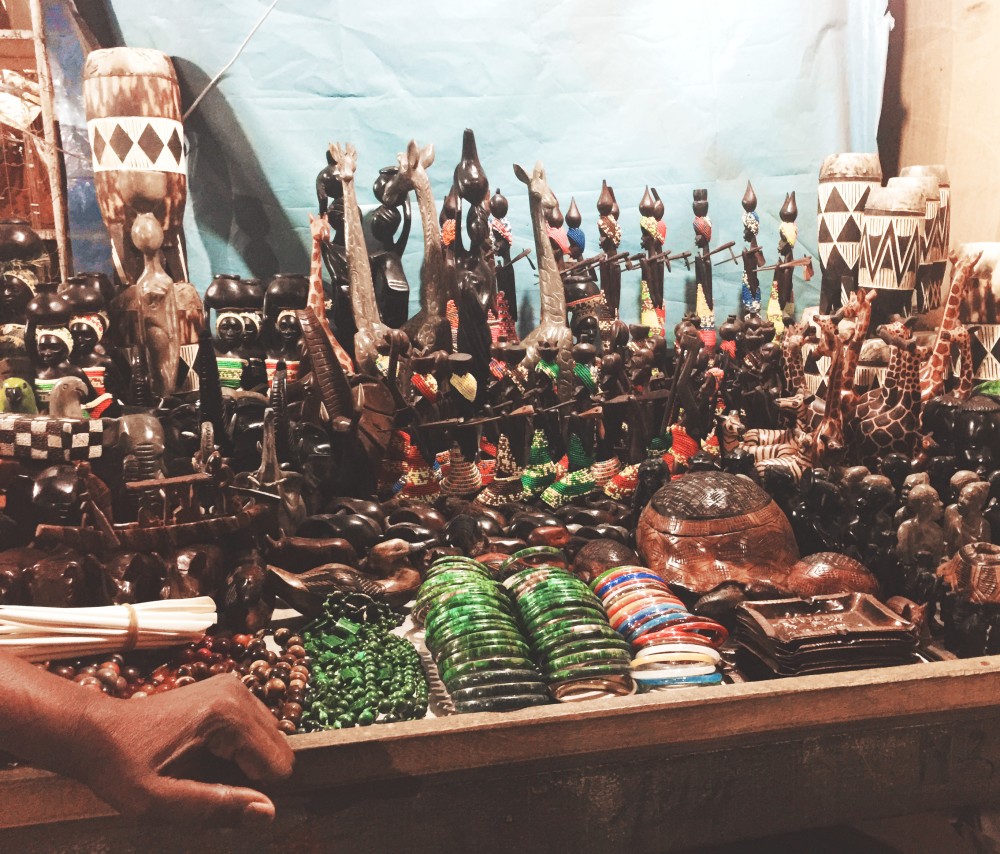 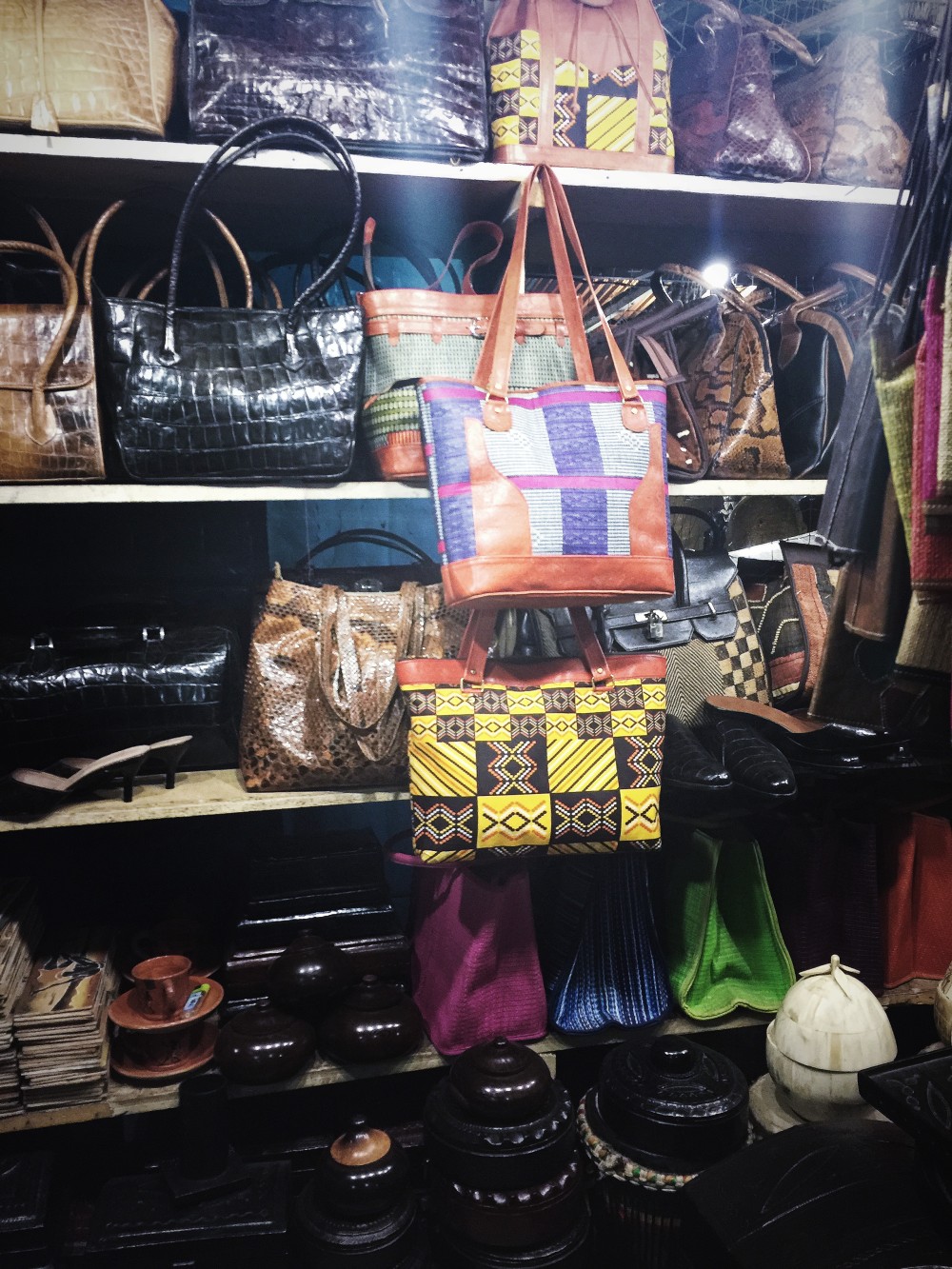 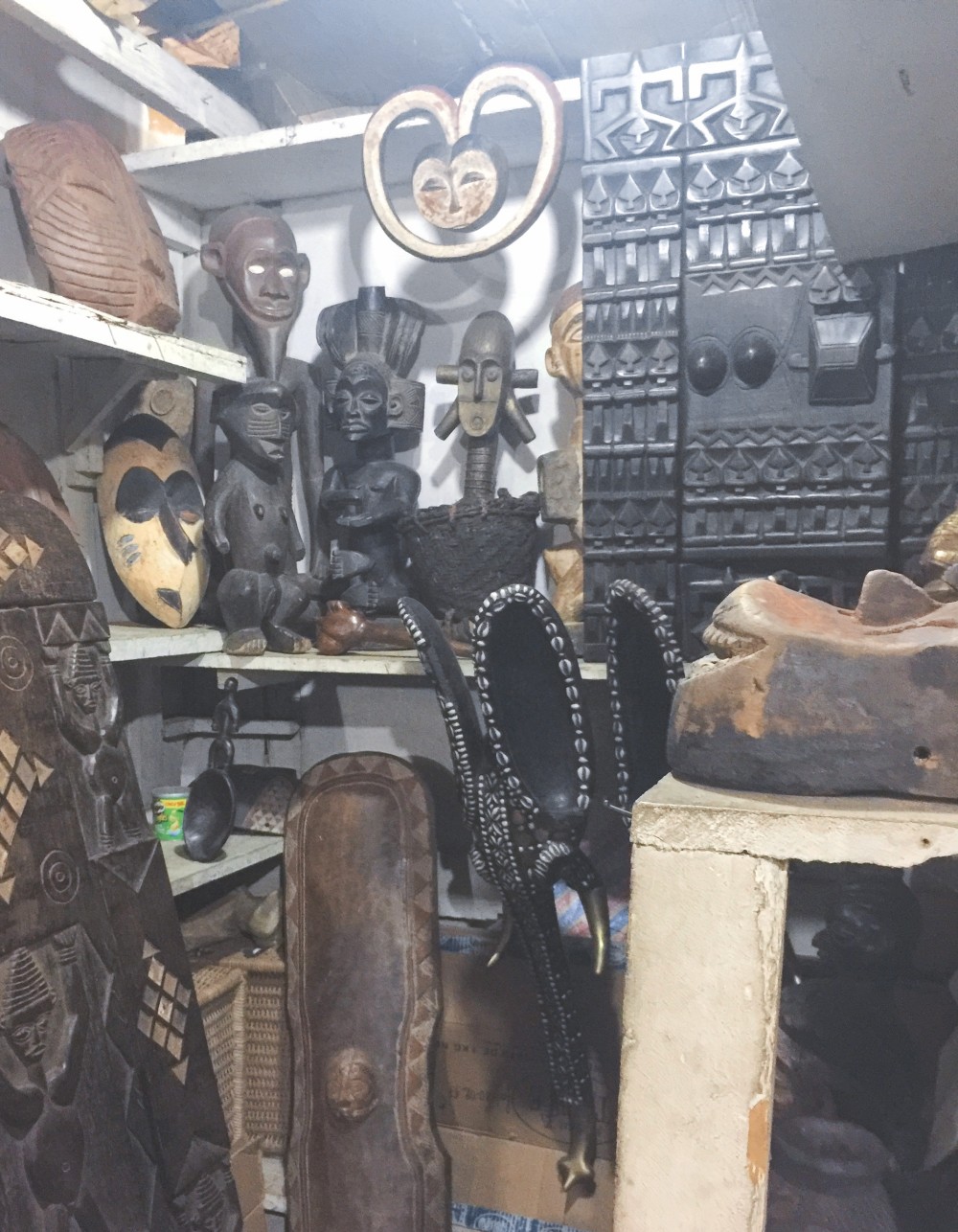 This mask was fairly frightening, with the spiders and two-headed snake. The market also sells “fetishes,” which seemed a bit voodoo-like. A few of the fetish carvings definitely gave me the creeps. 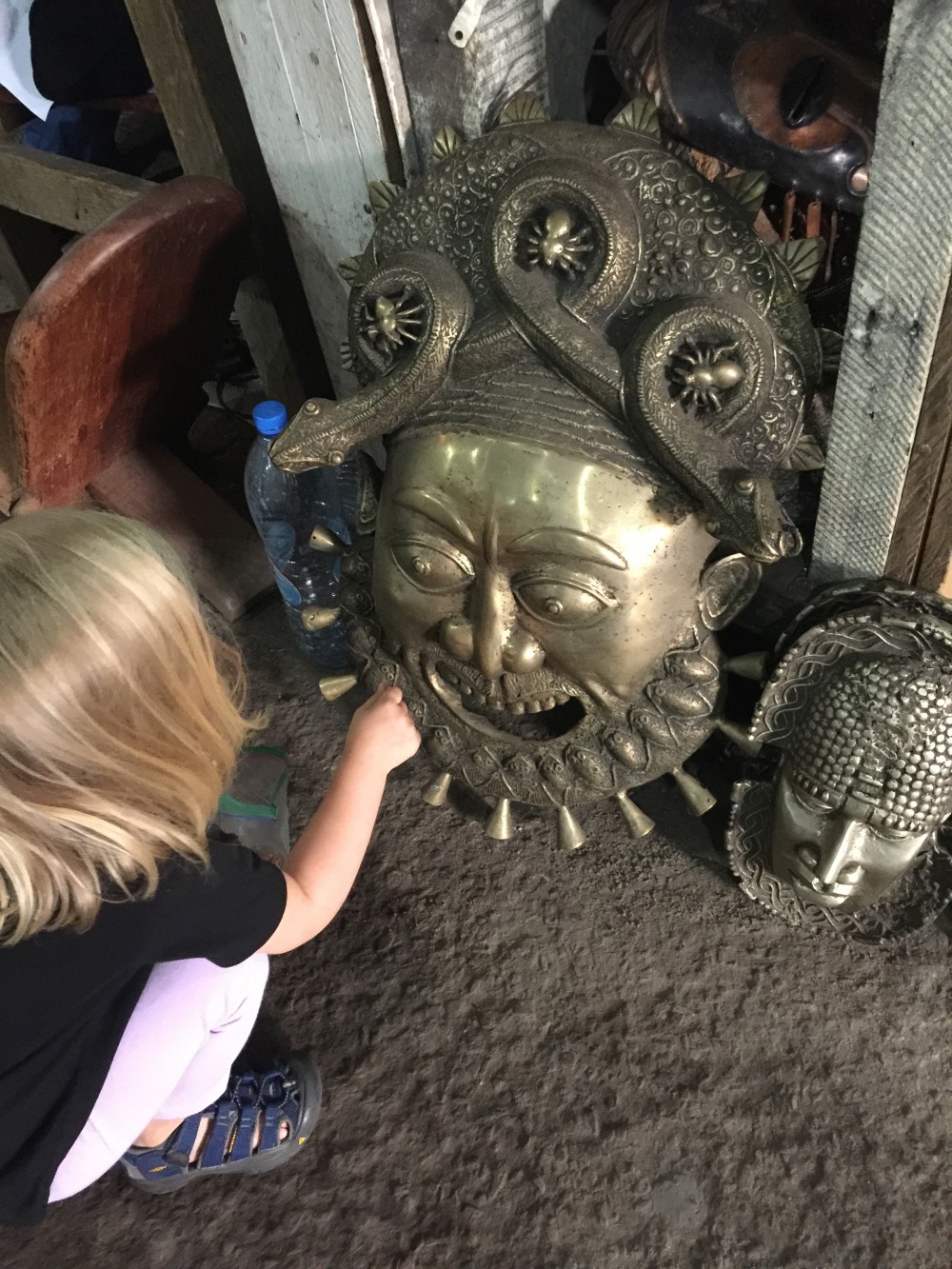 If one of Ben’s coworkers hadn’t shown me where this was, I don’t think I would have discovered it on my own. It’s on a nondescript street with a boring-looking entrance. 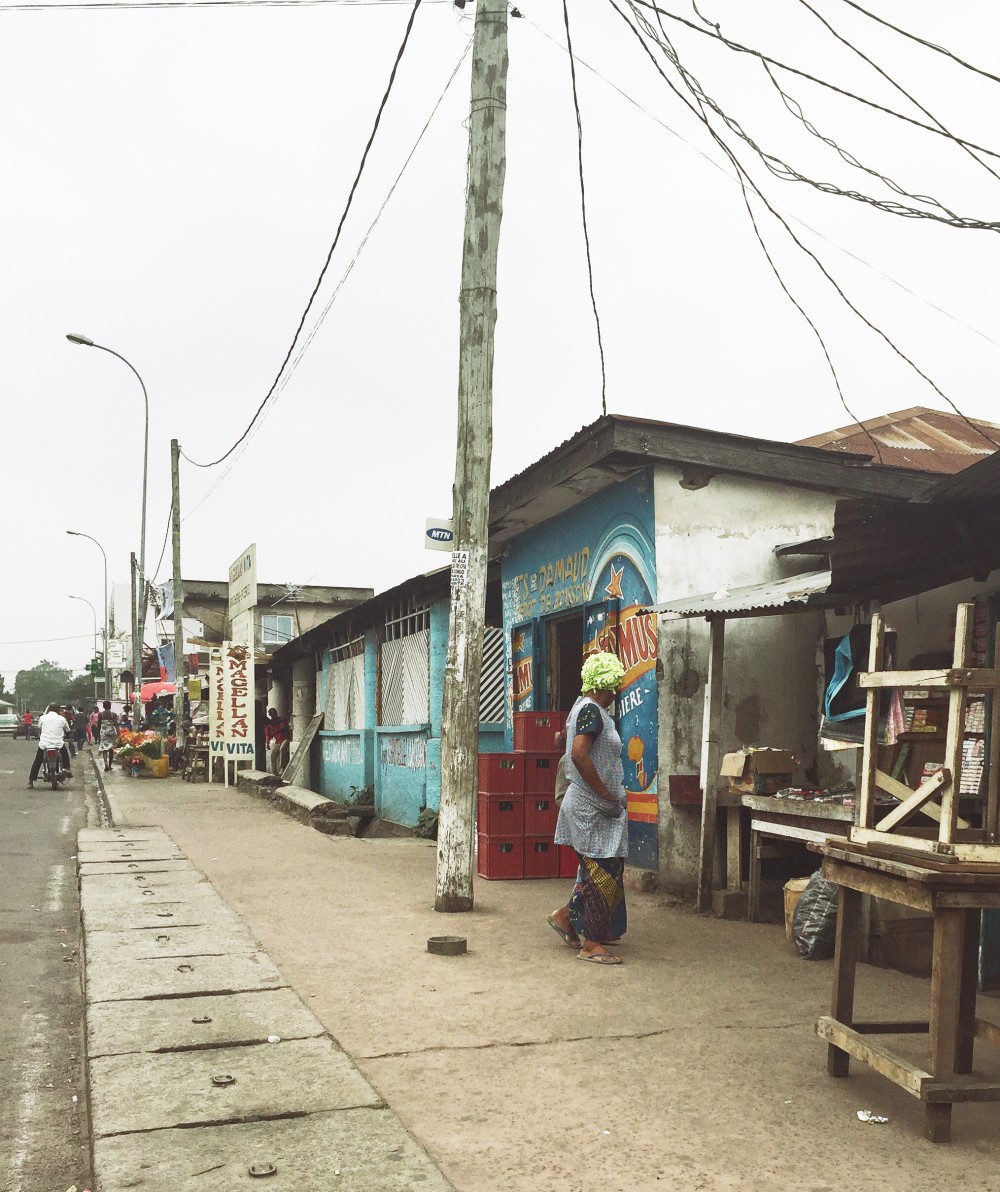 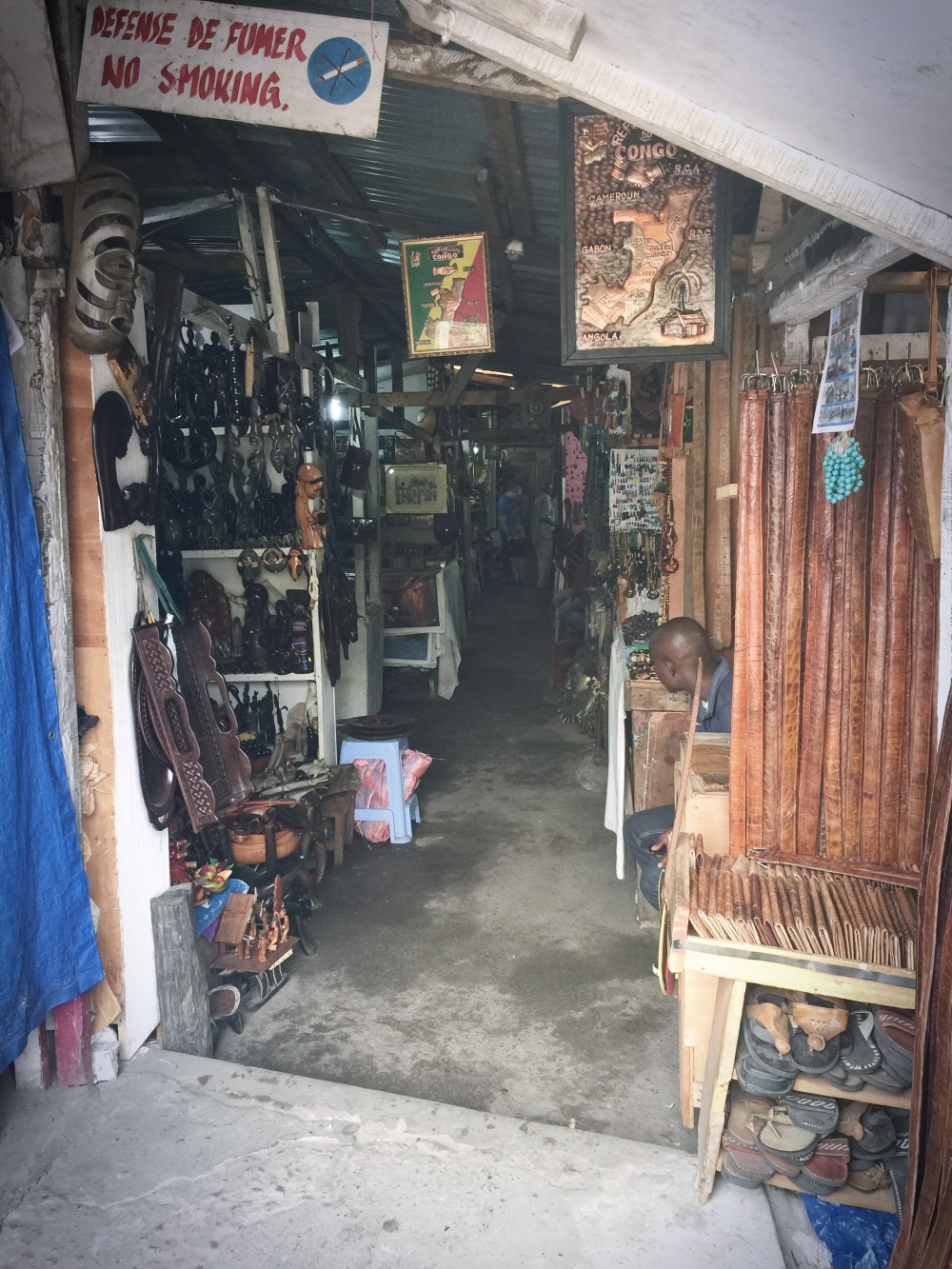 On the way home from the market, we passed by a wedding ceremony. 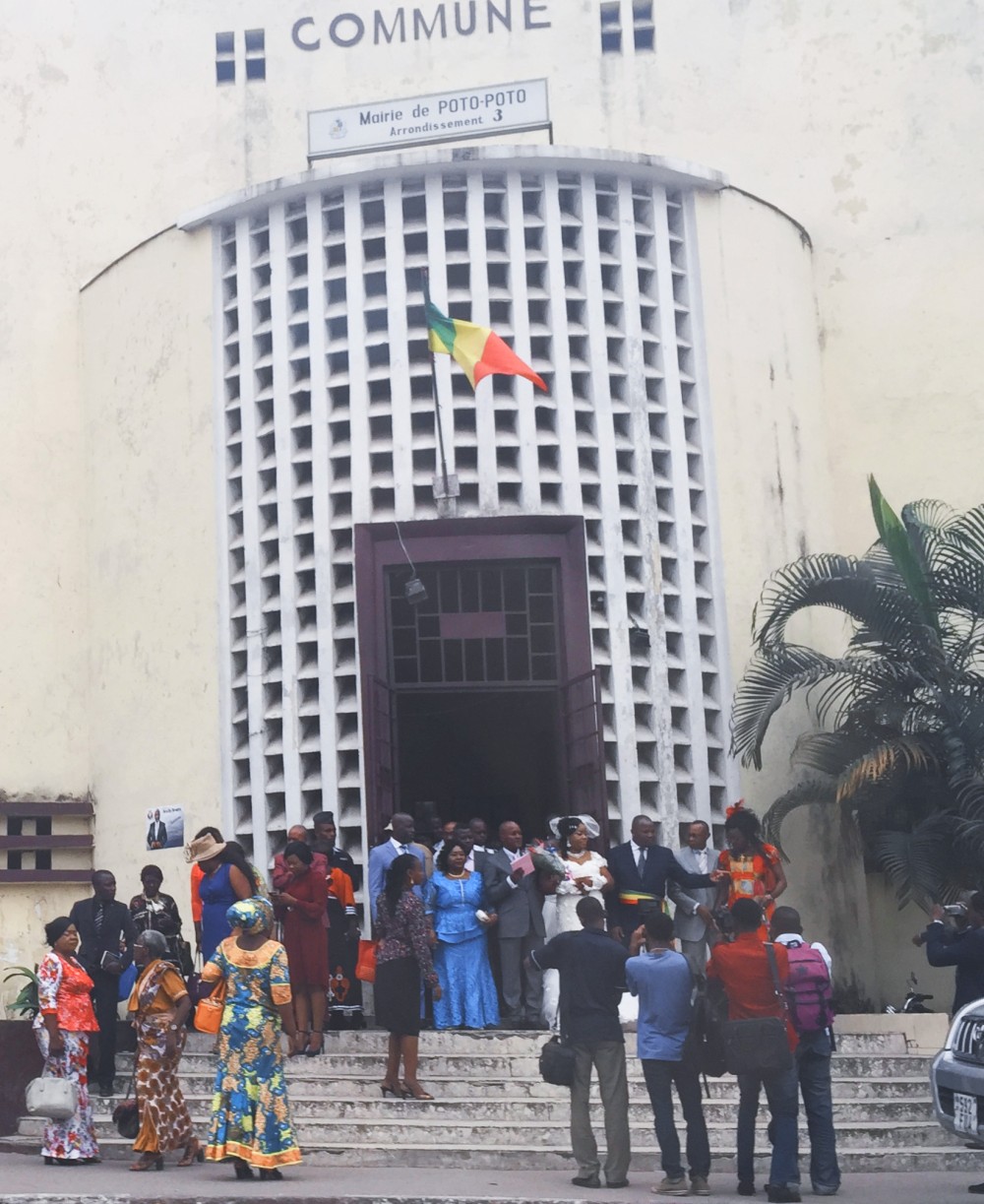 Like most cities, Brazzaville has a mix of old, run-down, and dirty buildings, along with new, fancy, sparkling buildings.  The Radisson, where we’ve gone swimming several times, is an example of the latter. Here are some scenes of the former. 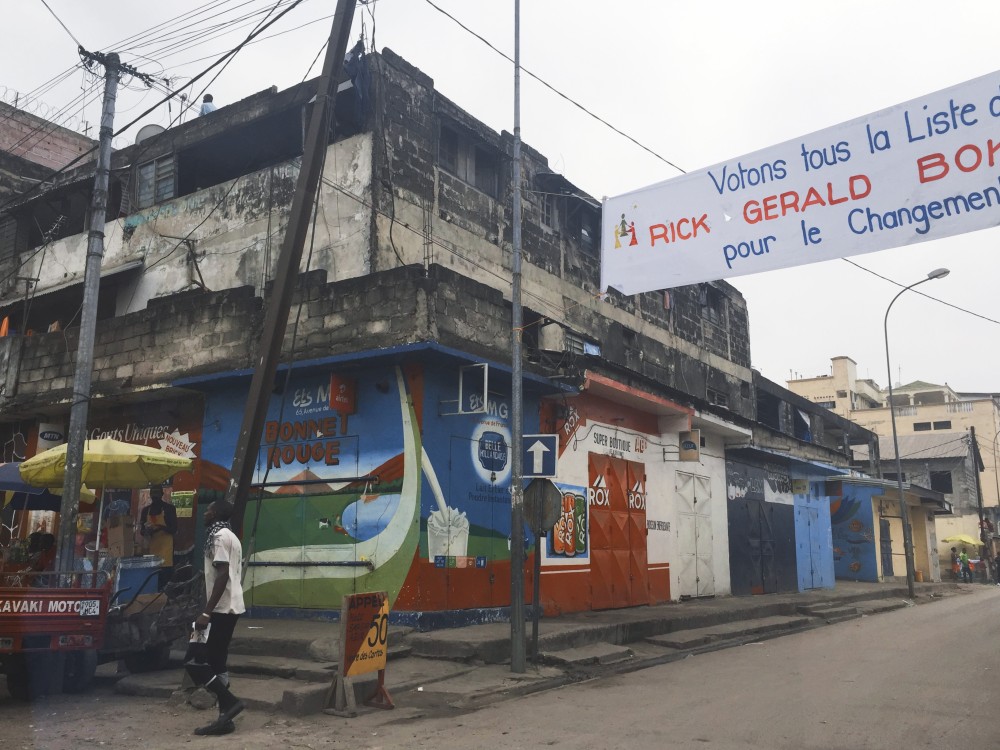 I’ve seen this elsewhere in the world, but I love the building murals. They are essentially paintings of advertisements of foodstuffs. It definitely makes the streets more colorful. 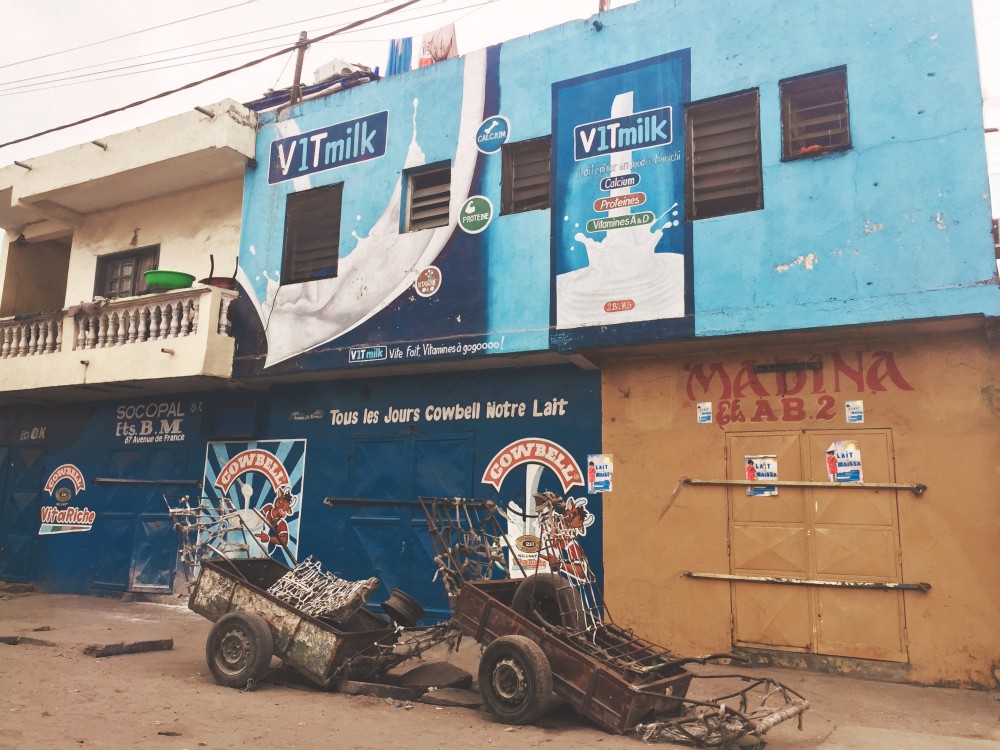 There are lots of trees and plants all over the city, which make some areas quite pretty. 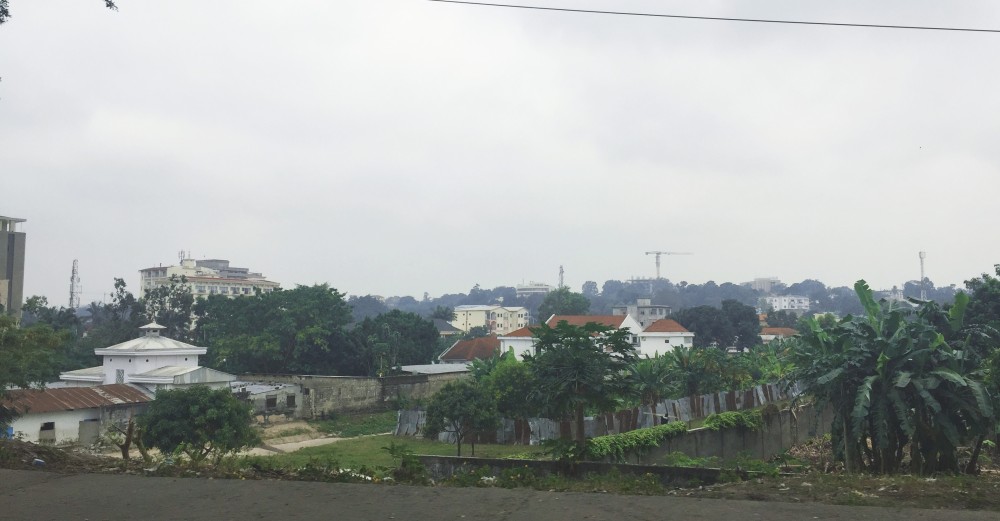 I’m continually surprised by how many large construction projects there are in the city. One near our house is almost complete (below), it’s a joint Chinese-Congolese development of some kind. This building is enormous! 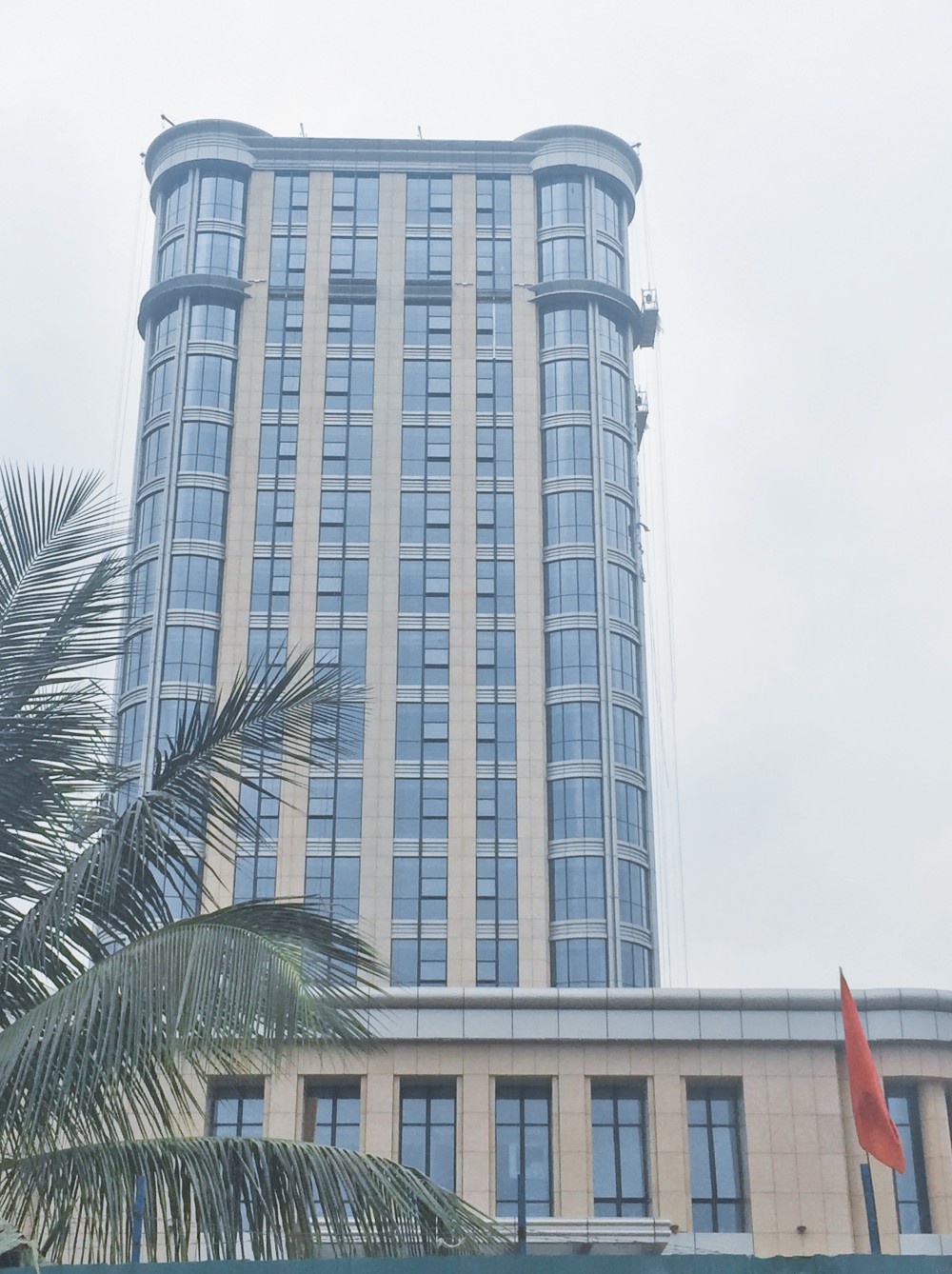 And just a few blocks away is another (below), I think it might be affiliated with a bank: 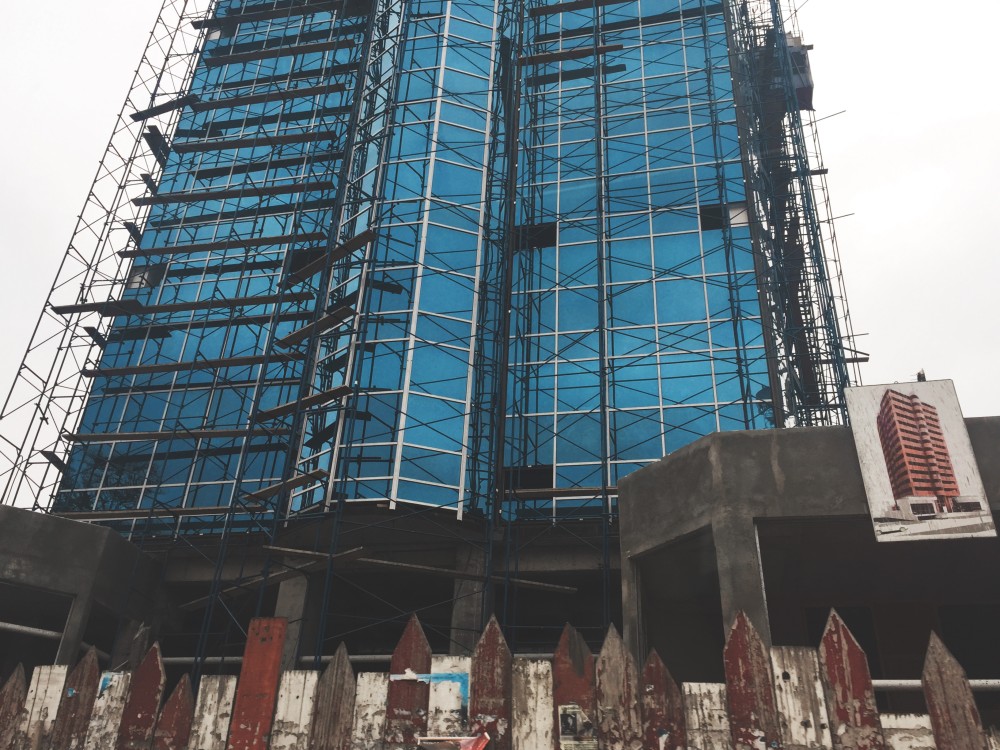